After all these years of CISACing, it seems apparent that none of it will lead to the DVD/BluRay release of Paris La Defense (once planned for 2003... which means that now more time has passed since 2003 than what had passed between 1990 and 2003). “It is an injustice for screenwriters and directors should not have fair negotiating rights,” @CISACNews President @JeanMichelJarre Room with a view #warsaw #poland

Day 152 : today I’m in Warsaw for the General Assembly of CISAC. Cisac is the United Nations of Creators representing over 3 millions creators worldwide. I have been elected president of the organization in 2013 and since then I’m carrying the voice of creators wherever I can along with the great team of Cisac. We achieved a lot but there is still long road ahead of us to protect and sustain the economic situation of the creators. #unitednationaofcreators @rugartechev and @masse_dr, representatives of APDAYC, participate in the General Assembly of the @CISACNews in Warsaw. To the center: @jeanmicheljarre, composer, electronic music interpreter and President of CISAC.
http://es.cisac.org/Sala-de-prensa/Comu ... -creadores "I'm here because we have to send a clear signal." Jean-Michel Jarre with a mission in Warsaw

The concerts attract millions of fans and have been inspiring musical stars for several decades. Jean-Michel Jarre is the godfather of electronic sounds and the magician of sounds. A French musician visited Poland, because in Warsaw the world-wide summit of organizations fighting for copyrights of artists continues. Jean-Michel Jarre is at the forefront of foreign artists. Jean-Michel Jarre with the title of honorary member of ZAiKS

Jean-Michel Jarre came to Poland for the hundredth birthday of ZAiKS. For the help and solidarity with Polish colleagues and the improvement of the artists' situation in the world, the musician was honored as an honorary member of ZAiKS.

By June of next year, French composer and musician Jean-Michel Jarre, son of Maurice Jarre, will be the non-executive president of the International Confederation of Societies of Authors and Composers (CISAC), based in Paris, which brings together 239 societies of authors from 121 countries and represents and defends about four million breeders from all disciplines. He took up this role in June 2013.

Jean-Michel Jarre, an activity that develops in several continents and also has as a reference the Japanese capital, since it is a country where it has had hundreds of thousands of admirers, is a unique figure of the world music and a brave and combative defender of authors' rights. He will cease his duties in Tokyo in June next year at a general assembly of the confederation. On June 1st, over 200 creators and societies convened in Lisbon for CISAC’s 2018 General Assembly, hosted by ZAiKS.

The assembly was opened by CISAC Board of Directors Chairperson and SOCAN CEO Eric Baptiste, who reiterated the mission of the confederation in the digital era. CISAC President Jean-Michel Jarre emphasised the need to speak in one voice. Poland’s Undersecretary of State Pawe&#322; Lewandowski updated that the country will push forward with aligning Poland’s legislation to the European Union to make sure authors receive compensation with private copying. A Women@CISAC panel was a centrepiece of the assembly, examining gender equality in societies and organisations. Jean-Michel Jarre: "To defend the diversity of musical offers, it is necessary to avoid abusive monopolies"

The pioneer of electro, president of the International Confederation of Societies of Authors and Composers, defends the creators while the directive on copyright must be voted by the Legal Affairs Committee of the European Parliament.

Jean Michel Jarre, President of CISAC, said: “Today is a great disappointment for millions of creators who have campaigned for years for the right to fair treatment and fair payment from giant internet platforms.

“It is incredibly disappointing that, having been ferociously lobbied by opponents using false arguments, the European Parliament has stopped short of supporting the fair rights of creators.

“Our fight will go on, for the future of our culture and for a fair, modern well-regulated Internet.” 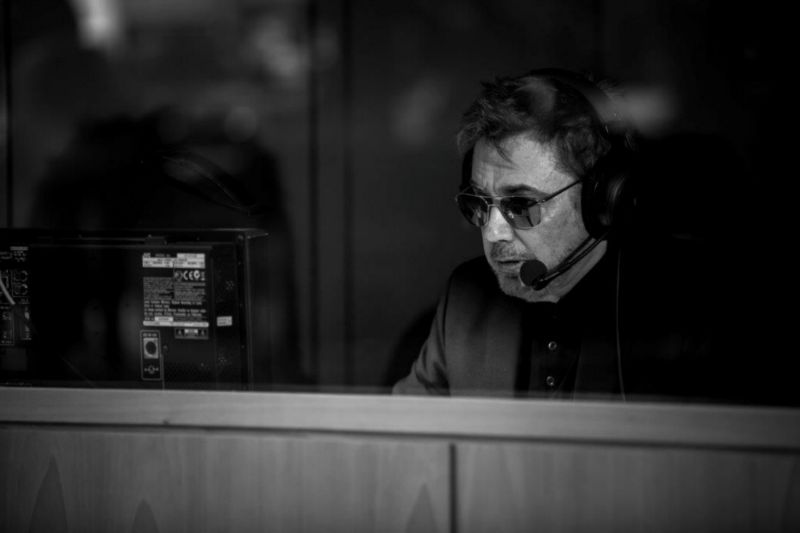 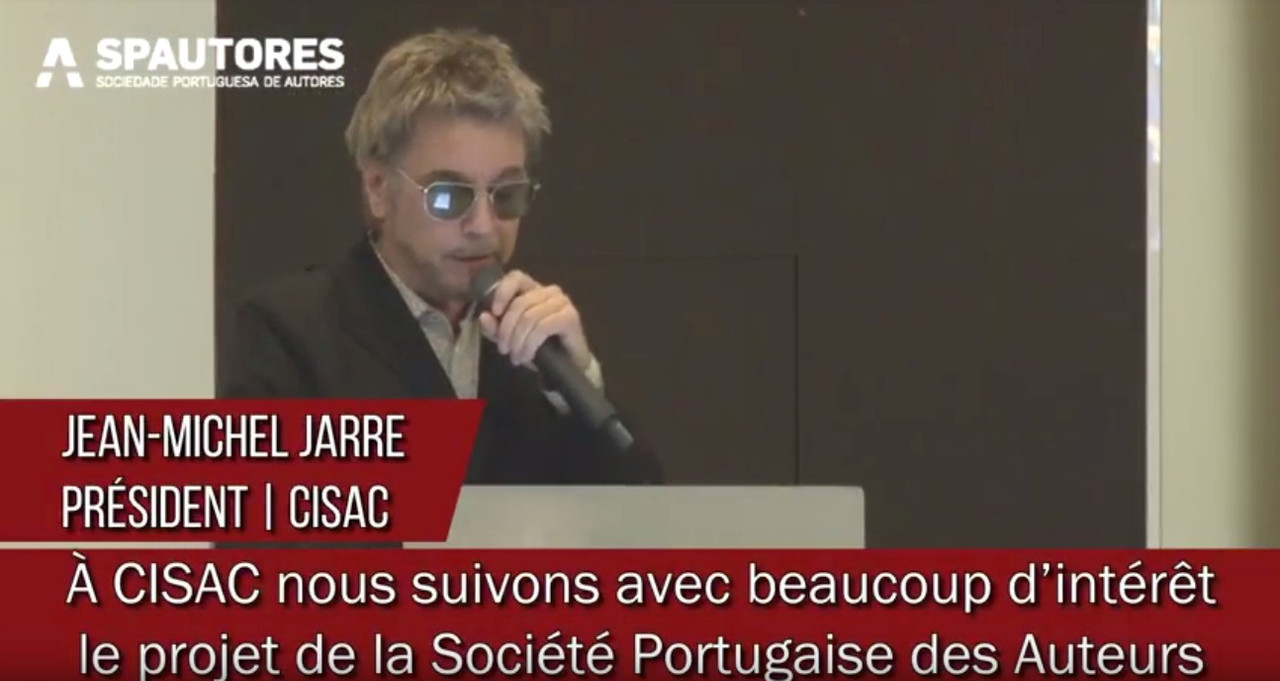 In 2017, SPA President José Jorge Letria visited SCM in Cape Verde. At the CAF in Rwanda, the committee encouraged the Lusophone Project. WIPO created an action plan in São Tomé and Príncipe. Solidifying the language, CISAC held its General Assembly in Lisbon with CISAC President Jean-Michel Jarre receiving the SPA Medal of Honour. SCM became a CISAC member that year. Cooperation was increased with visits to societies in South Korea and Morocco. 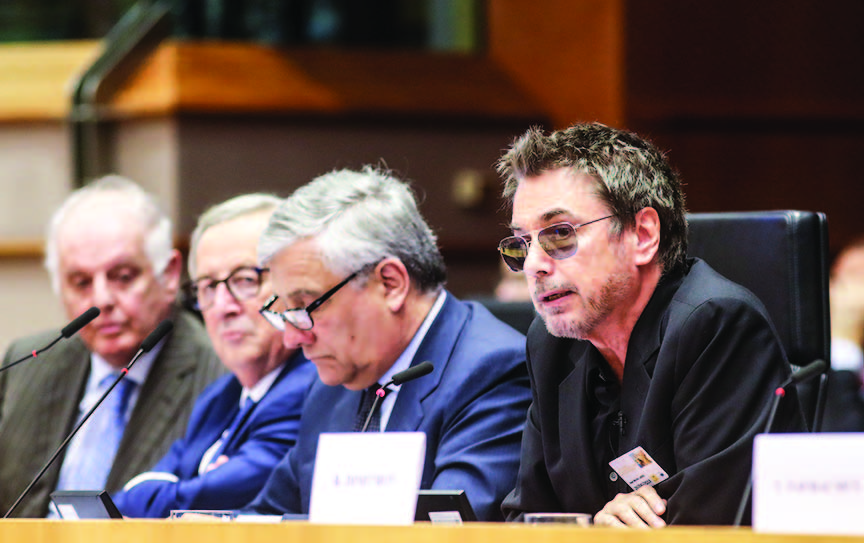 Tomorrow’s Europe: the return to culture

"We are the continent that hosts half of UNESCO's world heritage. And, wherever you look, Europe is synonymous with style, knowledge, beauty. This is our strength, the undeniable authority on a global scale - and our patrimony, which can not be relocated, must serve to political and economic renaissance. Even more than the economy, culture is the one that keeps Europe together - and culture must be the starting point for efforts to revitalize the Union." It was - the essence of European Parliament President Antonio Tajani - the key message of a high-level conference, held in Brussels on 26 June, right in the House of European Citizens.

Strong voices with clear, percussion messages were heard in the Chamber of the European Parliament - a true "orchestra", including conductor and pianist Daniel Barenboim, musician Jean-Michel Jarre, composer and conductor Ezio Bosso, cinematographer Radu Mihaileanu, but also Ministers of Culture from several European countries, museum directors, universities, associations, young musicians, European parliamentarians; in a word, many representatives of institutions active in the field of culture.

Jean-Michel Jarre: "Do we in Europe want to become" digitally colonized?"

The first to be given the floor - and one whose voice and arguments were heard most strongly in the plenary of the European Parliament - was the French musician, composer and producer alike, pioneer of electronic music, Jean-Michel Jarre. Nor could a more convincing defender of Europe's creators in the world: the 12 minutes of his speech condensed the challenges, the threats, the need for help - turning into a real and very striking appeal to action.

And because the French artist's plea has been one of the great moments of the conference, with open-ended applause, but also because the renewal of copyright laws will continue to waves, provoke discussions, we will make a few fragments (and arguments) of Jean-Michel Jarre's speech.

"Every European family, in each of your families, is a child, a brother, a sister, a mother who dreams of becoming a photographer, graphic designer, writer, filmmaker, musician. And who will miss this dream if we do not identify a just economic model for the 21st century and the new way in which we consume and distribute culture through the Internet and new media in particular.

If we want the European tomorrow's cultural heritage to be at the level of yesterday, we simply have to give it the [existence] means, as we have done in the past. That is why the Copyright Directive, which will be voted on the coming days, is at the heart of the subject. What is happening today is the future of the creators on the continent, our culture, the shine of our artists.

The evolution of the Internet has revolutionized our lives - and we have to keep up with it. This does not mean stigmatizing the great actors of the internet, it does not mean treating them as enemies, but the opposite: they must become our interlocutors and potential partners. From a certain point of view, let us not forget that the creators are virtual shareholders of these societies, which develop, enrich themselves thanks to our creative content.

It is, therefore, indispensable to define a legal framework in order to enter into negotiations with platforms such as Youtube, for example, which are defined as storage platforms, archives and not as content platforms. Why? Because the law simply allows them not to pay rights on the content on which they are based for years.

It's been twenty years since young people, music fans and cinema yesterday, have developed extraordinary machines that have become, over time, giants of the internet, not taking into account the collateral damage they could produce and transform today in a threat unless we do something to regulate things. Those who are today against internet regulations in the name of freedom of speech are like those who refused road traffic in the name of freedom of movement at the beginning of the automobile era.

The value of creation has now been transferred to those who distribute this creation, that's the problem! Paradoxically, creative industries have not been so prosperous in terms of turnover, but creators, who are the core of these industries, have never received so little. We need to rebalance this distortion effect.

The world is looking at Europe today. Creators all over the planet are looking here today - and the directive that will be adopted will hopefully create a domino effect.

Very seriously, we insist on the idea that we, the creators, would be against technology and against freedom of expression. It's totally outrageous! Creators are always the ones who imagine the future and are using the techniques of their present to be creators of modernity - I myself are a very good example in this respect. And what is even more unacceptable is that being a partisan of the idea of respecting intellectual property would be an attempt at freedom of expression, a form of censorship. It's just the opposite: not giving the creators the minimum means to express themselves is the supreme form of censorship!

If we talk about freedom, do we want to become "digitally colonized" in Europe? Europe has an obligation not to lose the battle for content - this tremendous creativity that is essential to our continent's DNA. A future for the digital world will only exist if there is a future for creators. And how can one imagine that paying creators is a form of censorship?

The problem comes from the fact that we rely on old laws dating from before the Internet. To create the tomorrow's heritage, give us the means to sit at the negotiating table. The more European and worldwide creators will receive a fair share of the distribution of their works, the more we will all contribute to manufacturing them. For, let's not forget, in a smartphone, the smart side is us, the creators."