Wow - JMJ at a festival!

This be great....a different and new format for JMJ

I've always wanted to go to the Sonar Festival !!!!!!
Harjinder The French musician performing at the Barcelona festival his latest work

The producer, musician and French composer Jean-Michel Jarre is one of the recent signings of Sonar 2016 festival which will be claimed as a pioneer in the use of synthesizers, samples and electronics archeology. The author 'Rendez-vous' return to Barcelona after passing in 1993 by the Olympic Stadium and in 2008 by the Liceu to present an audiovisual show developed from "Electronica 1: The Time Machine," his latest work.

"For me, Sonar has become everything a modern festival should aspire to be. From his impeccable urban setting that is as effective production, Sonar has been able to build a reputation on the continent and elsewhere to embrace some of the more exceptions shows of all genres. That's why I chose to mark Sonar my comeback and I'm really looking forward to my new show brand there, "explains Jarre himself in a statement sent by the Barcelona festival.


Second round of artists:

Sonar have announced further additions to the already considerable line-up for the Barcelona event in June. The festival will play an exclusive worldwide premiere of the new live show by Jean-Michel Jarre. His all new show will feature greatest hits from his long career, as well as material from his two new records, produced in collaboration with artists such as Robert Del Naja, Air, John Carpenter, M83, Boys Noize, Julia Holter, Gary Numan and Fuck Buttons, among others.
Also added to the line-up are 7 hour sets from Four Tet and Laurent Garnier, DJ sets from Jackmaster, John Talabot and further live sets from James Blake, Flume and Roots Manuva.

rinogurr wrote:(…)His all new show will feature greatest hits from his long career, as well as material from his two new records, (…) 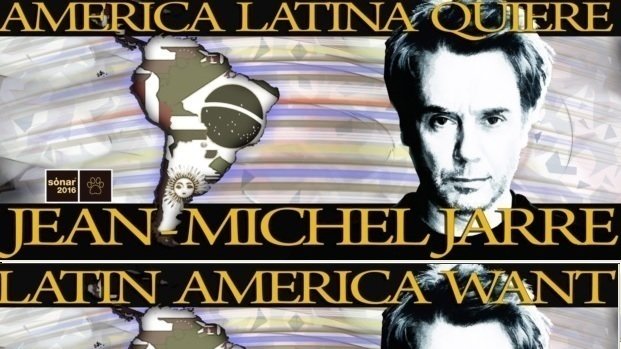 I finger cross for this, but these sort of petitions usually going nowhere...

But perhaps this very one gonna be the exception!

please note the following email I received as of today from Sonar about JMJ:

We are currently working in the final schedule, however I can confirm that J.M Jarre will be performing Friday 17 at Sónar by Night at 22:30. He will perform a regular show of 90 mim aprox.

Individual tickets for Sónar by Day and Sónar by Night will be available this very week. The French musician will perform on Friday June 17th, 10.30pm, at SonarClub, the main stage at Sónar by Night

Francis Rimbert has basically confirmed that won't be on the tour.

Domestos wrote:Francis Rimbert has basically confirmed that won't be on the tour.

Domestos wrote:Francis Rimbert has basically confirmed that won't be on the tour.

I don't mind changes in the team, but link/source please? Jean-Michel Jarre – The Father of the Tech-Shows

Jean-Michel Jarre will give a talk at Sónar+D and will exclusively premiere his latest show at Sónar By Night based on the two volumes of ‘Electronica: The Time Machine’.

The man himself: @jeanmicheljarre, sharing his decades of experience in electronic music at #sonarD2016