That's really odd considering there seemed to have been multiple dates, so where did those come from is the question. We'll see it eventually, but man, this is such a odd situation.
27-11-10: Ahoy Rotterdam
22-11-16: Heineken Music Hall Amsterdam
Post Posted Sat Feb 20, 2021 6:36 am

Wow, Armin, nice! He's talking about the PCR test, he does happen to live in a city where there's a relatively low contamination rate (I live there too).
https://popcorn-song.com
https://jeanmicheljarre.nl
Post Posted Wed Apr 21, 2021 2:46 pm

In honour of #EarthDay2021 we’re proud to present a very special episode of Uplink – a rare interview with Vangelis for a career-spanning talk about his visionary music and a vision for our planet.
Join us on April 22nd at 8pm BST / 9pm CEST / 3pm EDT at: youtube.com/spacerocks 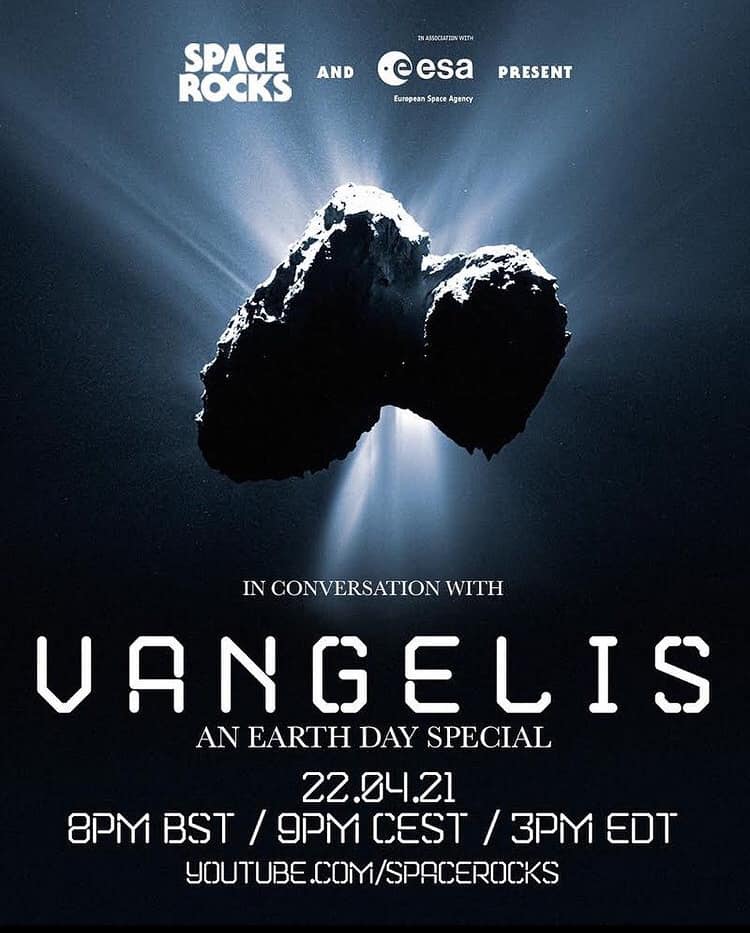 If there's one thing that I have learned from the handful of interviews he has partaken in in the past decade. Absolutely everyone conducting the interview is asking the absolutely worst and creatively bankrupt questions.
27-11-10: Ahoy Rotterdam
22-11-16: Heineken Music Hall Amsterdam
Post Posted Tue Apr 27, 2021 2:44 pm

It is understandible Vangelis felt he had done all he could in electronic music
because these albums aren't doing anything different to what Vangelis done previously.

So kind of understandibly logically Vangelis turned towards what he has been doing since 90s.
Post Posted Mon May 17, 2021 6:38 am

Even though even in the YouTube era, the whole "Jean Michel Jarre - Metallic Rain" thing hasn't died off and thus probably never will.

Soil Festivities is such a wonderful piece when it's raining outside. It just enhances the mood all the more.
Invisible Connections, it's just Beaubourg 2.0. There's probably a solid idea somewhere in there, but for a casual listen? Yeah, no...
I love Direct, it's such a fascinating album that goes all over the place. It's clearly not the typical approach he had to making music, but the results are great never the less.
The City is a wonderful piece of musical landscaping, although Nerve Centre is kind of... Weird combined with the rest?

I honestly understand why he started doing completely different things after Direct (I'd say The City fits in the sound scaping of Voices, Oceanic and El Greco), but man I wish he'd return to it or release some of the unreleased stuff from this period. Its really good stuff and I really enjoy nearly every second of it. He has admitted that there are albums that he has made and was planning on releasing, but those albums just never ended up happening for one reason or another. Opening up the vaults for this would be terrific. He has shown he's not that difficult with including (rare) tracks to new releases, so a release entirely made up of unreleased stuff could be interesting if he could find the motivation to do it. Different period, but I remember reading that Earth in specific was cut way down back in the day, I would do some genuinely terrible things to hear those tracks included.

Even though even in the YouTube era, the whole "Jean Michel Jarre - Metallic Rain" thing hasn't died off and thus probably never will.

Only Glorianna, Oracle of Apollo, Message on Direct sounds as V.
216 posts